THE DRONES OF TODAY 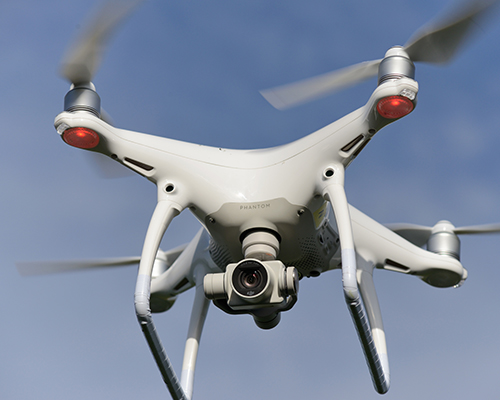 More and more people are using drones and UAVs. Transport Canada regulates the use of drones for the safety of the public and the other users of airspace. Before launching your drone, be aware of the rules that apply and follow them. Otherwise, you could put lives at risk, and getting fined for up to 25,000$, or imprisonment, or both.

Under current regulations, Transport Canada makes the distinction between the use of drones for recreational and commercial purposes. Flying an unmanned aerial vehicle for recreational purposes does not require a permit if the drone weighs less than 35 kg. Drones, however, must be used away from crowds and buildings, and in compliance with laws governing intrusions and the protection of privacy, and should in no case be used "Near moving vehicles, highways, bridges, busy streets or any other place where you could endanger drivers or distract them. " They should not present a hazard to aviation safety. If the drone is filming or taking photographs, no permission is required as long as the images are not used for commercial purposes.

On 8 July 2016, the Edmonton Police’s Air One helicopter narrowly escaped disaster when a drone flying at 450 meters above sea level found itself 15 meters away from the helicopter. These kind of incidents have multiplied in recent years with the rise in popularity of drones. Surprisingly, although commercial drones must obey the regulations set in place by Transport Canada, they do not apply to recreational drones. (Réf. : www.ici.radio-canada.ca)

The federal government is seeking to establish the most advanced regulations in the world for the use of drones, whether used for business or recreational purposes.

"Flying a drone is more than a hobby," maintains the Minister of Transport Marc Garneau, who reported concerns about the growing use of drones near airports. This practice is dangerous for drivers and their passengers, according to him.

"We are all responsible for the safety of people on the ground and in the air," he says

A new regulation will be presented within a year. Meanwhile, the government will launch a social media awareness campaign targeting drone users.

Examples of potential uses for drones can be divided into several broad categories:

GASTI can accompany you in your projects with regard to regulations and training.